The Directing Motion Tour a 32 city adventure over 9 weeks 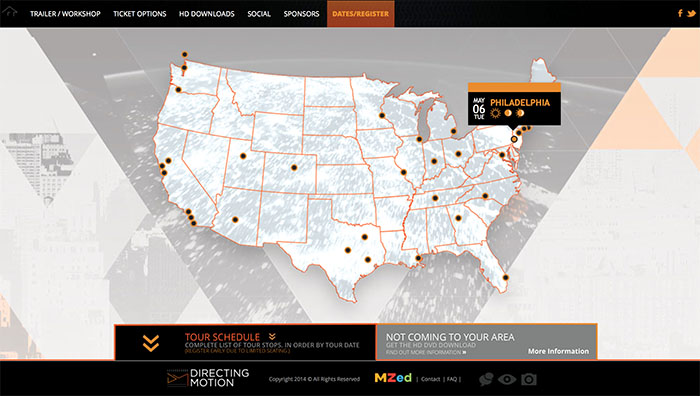 In just under a month, I am going to start a cross-country "Directing Motion Tour" that will span 32 cities in just over 9 weeks,  where I will focus on how, when and WHY to move the camera (as well as how to direct action in front of its lens.)

It’s fair to say that you cannot be a competitive filmmaker in today’s market if you don’t know how to move the camera with purpose as well as to have a solid understanding of blocking dynamic scenes in front of it.

Orson Welles and Steven Spielberg were two of the directors that had a notable influence on infusing movement into almost every scene and by doing so they were able to better engage audiences on an intellectual and emotional level and effectively change the game.    And that’s why we will be carefully dissecting their work and that of nearly 100 of the best directors and DPs of all time during the workshop.

If you’ve ever wanted to elevate the level of your directing / DPing skills with an extremely solid understanding of how important camera motion is to just about any piece of motion these days – this is a workshop you just might want to consider.

We won’t be discussing picture styles or 4K vs 2K here…  This is definitely meant to be the next step in terms of workshops and to build upon what many of you learned in Alex Buono’s workshop "The Art of Visual Storytelling" tour (and in fact is being run by the same group.)

So what exactly is this "Directing Motion Tour" you ask?

Well for me, it’s a bit of a guilty pleasure… motion is something I’m obsessed with – but only when it "serves the story."  That’s CRITICAL.    I generally am not a fan of "unmotivated movement"  – or in laymen’s terms:  Michael Bay movies where the camera is flying around for no reason other than to create "eye candy."  But I digress..

For a few decades now, I’ve promised myself that one day I would be lucky enough to have a big home theater, and that I would sit back and watch all of my favorite films and to break them down scene by scene…  Problem is:  I never found the time, and when I did watch them, I would more often than not fall right under their spell:  and out went any chance of analysis.

Then something interesting happened, nearly 3 months ago I broke my arm and suddenly had far too much time on my hands with little to do but stay as still as possible and heal… what to do?

Well that’s how the Directing Motion Tour was born.   I ordered nearly 100 BluRays of my favorite films and a few key TV series, and watched them while taking copious notes.   In all I’ve already spent close to 300 hours analyzing my favorite films and scenes… and I have more than 400 examples to share that I will surely have to decimate down to the very best ones…

Here’s an example of the first section of the Keynote: 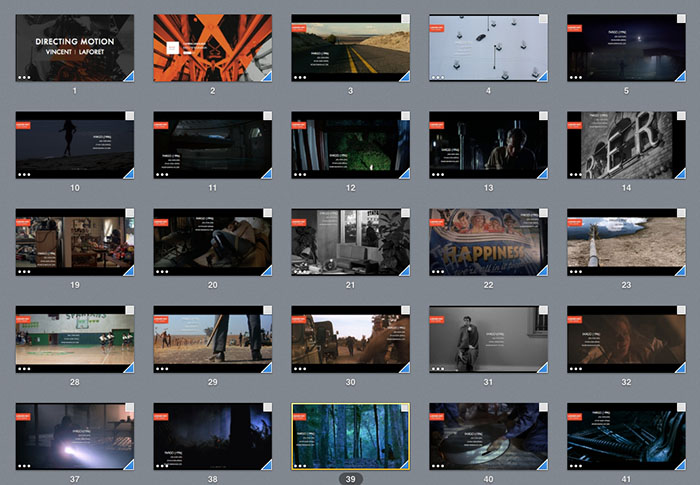 Simply put, unless you think you’ll be able to find the time to do the same (4-8 weeks to carefully analyze 100 of the best films of all time)  this workshop is the closest many of you will get to doing so…  and in just one day.

I have to tell you:  watching these carefully curated clips is worth it alone for just about anyone who loves film…   I can also tell you from experience that once you attend this workshop – you will go from being a passive viewer to an active viewer of film/motion content – and that you’ll never be able to see things the same way again.

So what exactly will we cover during this tour?   First there’s a mid-level detail outline of what we’re doing on the site here.   In short the course is broken down into 3 teaching sections, and 3 live shoots followed by an evening session.   You can click here to see the dates and cities I’ll be visiting from May 6th thru July 13.

It’s very important that while we will be basing the workshop on some of the best films of all times – THESE PRINCIPLES APPLY to EVERY PIECE OF MOTION anyone shoots.    The techniques blockbuster filmmakers use absolutely apply to interview setups, sports promo shoots and live-event coverage, wedding films, webisodes, shorts, documentatires and just about anything you’ll ever cut on your Non Linear Editor program (i.e. your editing software)   If you’re a documentary filmmaker for example and don’t have all of the bells and whistles in terms of gear – you’ll find that you can apply the same principles to how you move around your environments as you shoot and not to mention affect your coverage of how you shoot your docs.

In the day session and workshops we’ll study the following (this is but a fraction:)

1. Basic camera moves.   Sure you know the difference between a Push & Pull right?    But have you seen how Scorsese uses a Dolly Right in Goodfellas in an entirely different manner than Terry Gilliam does in Brazil or Ron Fricke in Baraka?  Have you ever studied the nuances in how to do a push move to achieve wildly different results in Ferris Bueller’s Day Off vs Shawshank Redemption given different contexts,  even though it’s the exact same move?    Do you know what a creep vs a smash is, or a Parallax move vs an Arc is?

2. Did you know that screen direction dictates that panning left-to-right pan makes audiences feel more comfortable than a right-to-left pan?  That’s right the direction of your Pan is not a 50/50 proposition…

3. Do you know how to block out action in front of your camera with actors and extras – to bring a scene to life even if you don’t have fancy camera equipment (ergo only a tripod or sandbag or are just shooting handheld) in a way that energizes the frame and scene regardless?  We’ll cover that.  (See Diagrams below from the workshop.) 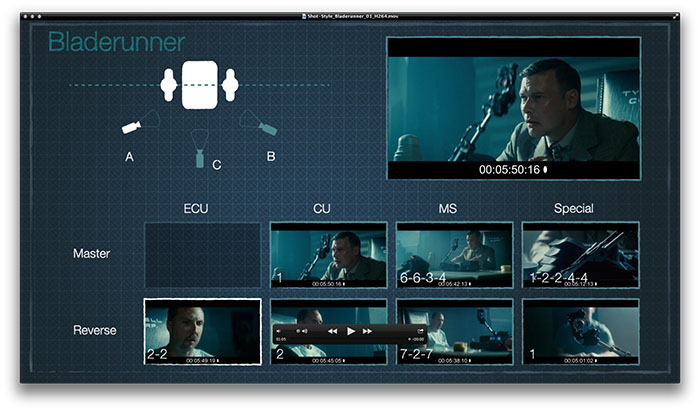 4.  When your back is again the wall, do you have a rock solid understanding of what "coverage" means, let alone a formula that you have down cold that would allow you to cover ANY scene with two or more actors/subjects and have bullet proof material that you can always cut no matter what happens?  We’ll cover that too…  I’ll share with you some pretty important tools you can take away with you and use forever – whether it’s a TV interview, blockbuster film, or wedding video… it definitely APPLIES!

5. If you were asked to shoot a TV episode of "Shameless" tomorrow with two handheld cameras at once which is the norm for the majority of top TV shows these days – would you know how to draw up shooting diagrams and shot lists to make your day?  We’ll go over that too…  We’ll break down complex blocking diagrams from some of the best films of all time. 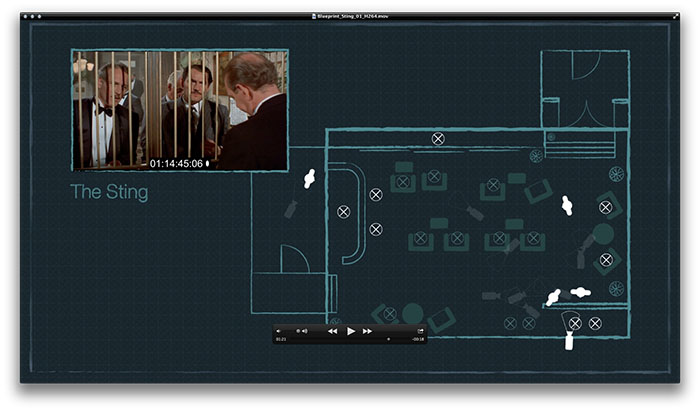 6.  If you’re aware of the basic coverage structure in terms of having an establishing master, medium, closeup and then a reverse (we’ll shoot that during a live shoot if you’re not already familiar) are you aware of how a moving master can not only make your scene more dynamic, but also pick up some important coverage along the way and ultimately save you time?

7.  Lastly at night we’ll discuss my process for writing treatments for commercials all the way to tech scouting, storyboarding,  budgets, casting etc – basically I’ll walk you through how to not only hopefully prepare yourself to land that next gig, but just as importantly how to pull it off. 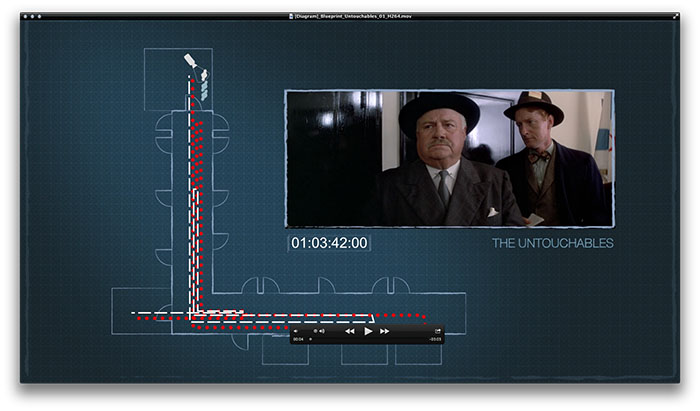 I’ll be releasing more detail in the coming weeks.   For now I invite you to visit the Directing Motion Site to find out more.

And this won’t just be theory drawn from Spielberg, Scorsese, DePalma,  Welles, Hitchcock, Cuaron,  Gilliam, Darabont, Deakins, Daviau, Deschannel, Hall and so many more.    We’re going to shoot this stuff live with some of the best cinema gear in the business for all of your gear heads… and you’ll be invited to be part of the crew.     We’ll shoot classic coverage on a dialogue scene, a complex one shot wonder with intense blocking and timing queues, as well as a 2 camera hostage scene LIVE as a team, with careful tips and tricks along the way.

I hope to see you out there on the east coast, west coast, midwest, and the south (and Canada!   You can click here to see the dates and cities I’ll be visiting from May 6th thru July 13!    And for those of you who won’t be able to make it in person, there will of course be a downloadable 1080p version of the course come May 31st.

For those of you joining us  I look forward to taking you on this pretty exciting journey!

If you’re thinking of coming or have already signed up, you can start the process by studying these 50 films and how they specifically related to movement:  these are the same films we’ll be breaking down (more than just these believe it or not…) together on the tour!   See many of you soon!

At the very least, I invite you to get another benefit from this tour and this blog gratis:  I’m giving away 50 of my favorite films on BluRay to anyone that follows me @vincentlaforet and @directingmotion on twitter – go to this page for more details.   You can at the very least expand your home collection pretty darn nicely!   Below is the actual stack ready to go…

Empire of The Sun

No Country for Old Men

Silence of the Lambs

I’ll also be discussing many of the principles behind the prep, shoot and camera movement in my latest commercial for Nike: