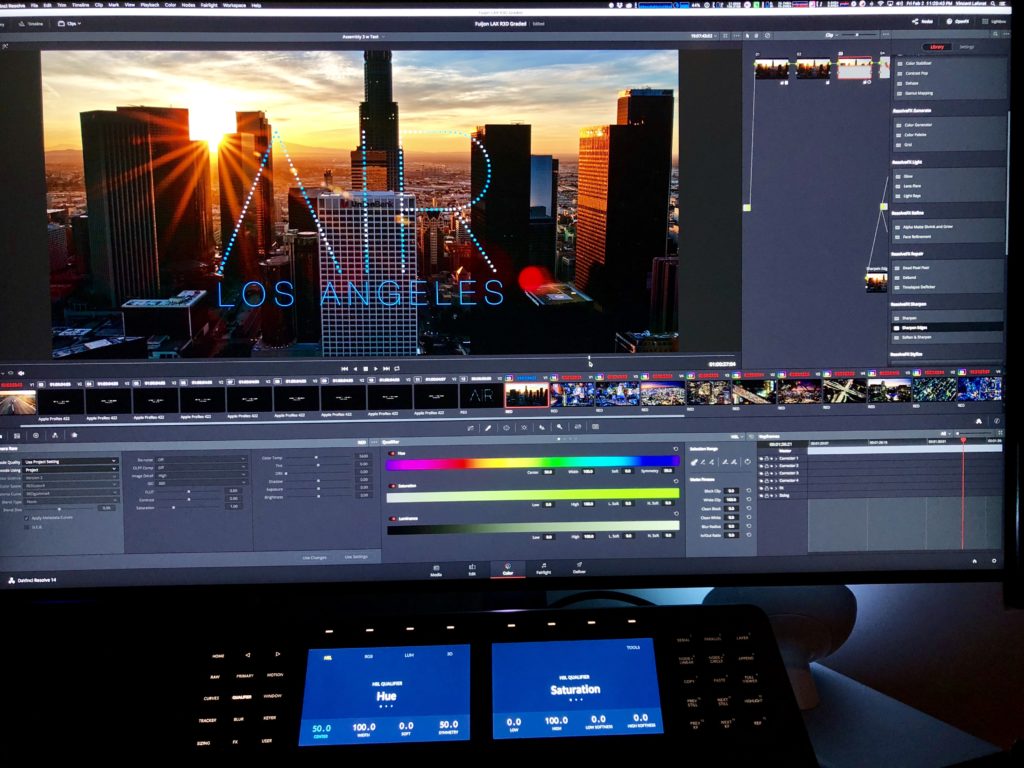 So is Apple’s 18-Core iMacPro worth it?

In short: YES – if your software can take advantage of it. That’s the KEY.

But just as key: the 10-core iMac is really at the sweet spot of what the vast majority of users will likely ever need. It’s a little beast!
Final Cut Pro X is clearly designed to take FULL advantage of the 18 cores, whereas DaVinci Resolve is several times slower on similar exports (as much as 5 times slower) and unfortunately Adobe Premiere is currently not even on the same racetrack…

The results continue to be seriously impressive especially for those transcoding high resolution and RAW coded footage or using processor intensive VR footage for example.

The best way I can illustrate this is by sharing the following test:

2. I loaded the footage into the latest Final Cut Pro X version and asked it to generate: Optimized Video + Proxies.

Here are the results of how much time that took:

– The 10-core iMac Pro was anywhere from 10-80% slower depending on how the software took advantage of the 8 additional cores and the process.

With software such as Adobe Lightroom the difference was negligible- whereas w FCPX transcoding it was as much as 80% faster due to the 8 additional cores.

– The top-of-the line Mac Pro was still transcoding (generating the initial first of three steps: generating proxy and optimized media for the first of the 2 clips .. it was at 96% of the first clip…)

– And for of those who are still holding onto the old 15″ MacBook Pro w/ Magsafe… well … it took well over 6 hours to do the same 3 steps.

Here’s where it gets REALLY interesting though:

ferent pieces of software that are specifically designed to take advantage of the CPU / GPU etc:

Speaking of FCPX – the playback of the 8K footage and scrubbing of it is so utterly effortless that it’s very hard to recommend anything else right now if you’re editing RED R3Ds on a Mac.

The iMacPro 18-core plays the footage in DaVinci Resolve at 5.8 fps whereas the 10-core plays the same footage at 3.8 fps. More importantly the footage (while rezed-down) in FCP X looks sharp on the 18 core prior to any proxy generation … is visibly lightly “blurry” looking on the 10 core (as it’s being rendered at a lower quality.)

So what’s the skinny – is the 18 core vs the 10 core worth $3K more? The answer is simple: what’s your time worth? What format are you shooting (and can it take advantage of these cores) and more importantly: Can the software you’re using take full advantage of the 18 core?

If you’re purely a Davinci Resolve user – then you’ll need to wait a bit for them to take advantage of those additional 8 cores – and I’m sure they will. Currently you get an error message every time you launch Resolve, stating that it can’t take advantage of the 18-cores with RED’s RAW decoder

You’ll notice I haven’t mentioned Adobe Premiere Proe Pro results in these tests … well, you’ve got to realize that all of these pieces of software improve upon one-another with leaps and bounds… and given the amount of friends I have at AdobeAdobe I’m simply going to say that as of this moment: their photo and video apps are on the valley side of the equation … not the peak.

Disclaimer: as with my last post, for those on the very highest end, a custom built PC is still likely to give you the best bang for your buck in terms of pure performance. That being said, 50% of those who’ve custom-built one swear by them … whereas the other 50% swear AT them and are utterly frustrated w them and Windows … it’s a mixed bag and larger depends on your Love (or opposite) of Windows.

Just 2 years ago Adobe’s Premiere and notably Adobe’s Media Encoder was TEARNG thru R3D and H.264 footage making it a – if not THE – GO TO NLE – or editing software.

At the end of the day: we’re going to have to become proficient w ALL NLEs – Final Cut Pro. X, Adobe Premiere, Davinci Resolve and … well no: Not Sony Vegas …sorry. Is that still around?

Point is: it’s likely going to ebb and flow and all of these pieces of software have CLEAR advantages. For exaMark Toia Toia is teaching his son to become proficient in all of them. He’s editing 20-30 day commercial shoots (shot in 6K-8K RED) on his MacBook Pro on the road as well as a feature film in Final Cut Pro X … and he is proficient in ALL NLEs. Says a lot – no?

For those who use software that routinely use high end footage that pushes hardware to its limits – the 18-core is AWESOME.

For most people: the iMacPro 10-core is a really, really, really SWEET SPOT. That’s also a key takeaway – I’d venture to bet that most people will be quite happy with the base model 10-core iMacPro for their Video and Still photography needs – that is 2X to 3X faster than any other Mac out there today.