More often than not, when you’re doing a slider move, it’s common to build your move around a visual "anchor" in the foreground, so that the camera movement is exaggerated by the difference in movement over relative distance between the foreground object and the background.   This is know in the film industry as parallax, or if you’re Tom Guilmette as "Backpan!"  (That’s an Inside joke from Master in Motion.)

More often than not – such as in product shots or interview –  you design the move specifically so that the foreground object is always the subject of the shot, centered in frame, as the slider moves down the track – so that it appears that the camera is rounding the object.  You’re basically creating the ‘appearance’ of rotating the camera around your subject in an arc, while in actuality simply sliding left to right and panning in the opposite direction to stay on target with your subject…

In order to pull this off, you need to have a fluid head mounted to your slider, so that you can pan pull off the move effectively, and doing it well takes practice.  This process can become a bit mind-numbing during a long interview (not to mention irregular in terms of how often you ‘nail’ it and how fast you’re going…)   This little move, now forever coined as "The Backpan" by Tom,  is not only tricky to execute, but also requires a dedicated crew member.  To deal with these challenges and the reality that many of us work solo, there have been some new sliders recently manufactured that include a curved track. 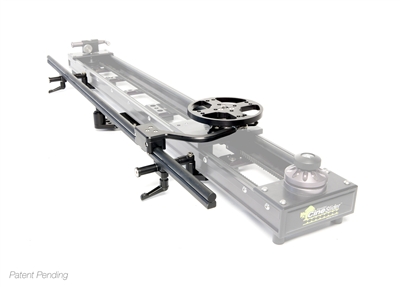 That being said, I have to give a tip of the hat to a piece of simple (and some would say genius) engineering that adds this capability to equipment that you already own, if you own a Kessler slider that is.

Kessler Crane has developed their own Parallax system, which consists of a rod that affixes to the side of their sliders, and connects to a rotating mount that attaches to the slider mount.  The bar can be adjusted at different angles relative to the slider, so that when the rotating mount travels down the slider, it is forced to rotate a specific amount based on the angle you’ve positioned the bar.  It’s really not as complicated as it sounds, and is an incredibly clever way to achieve a controlled version of this shot.  You can check out the video above to get a better sense of how the Parallax works and can be applied.

While speaking about Kessler, it is also worth noting that they have recently released Carbon Fiber versions of the Philip Bloom Pocket Dolly and the Stealth Slider – making these already lightweight sliders even easier to travel with and carry, especially if you are operating as a one-man-band.

On some other accesorry notes that can make a BIG impact relative to their cost:   I wanted to mention a cool new cable from Hocus Products that I have incorporated into my MoVI rig.  I have been using the Axis1 follow focus on the MOVI to remotely control focus for nearly 4 months now w/ flawless results.  This new cable allows you to start/stop the camera from the wirelss focus transmitter itself (i.e. wireless start/stop.)   This may not seem like a big deal at first, but the truth is that given that the MOVI operator  has both of theirnhands full w/ the MoVI rig supporting their camera, s/he will start a pre-roll very early, and cut late… while doing some sort of juggling act to go from holding the MoVI w/ two hands down to one…   All of this amounts to tons of wasted roll time as you reset the camera position or wait for the 1st AC (if you have such a luxury) to run over so someone can cut the roll!   And with that comes the potential for a large amount of unnecessary data being recorded, transcoded, and backed up – especially if you are shooting on the Epic (at high frame rates 96 fps at 5K for example.)   However, Hocus has developed a cable that interfaces with the Axis1 wireless controller, and plugs directly into the Lemo port on the EPIC to control start/stop remotely.  Definitely a a small, but helpful item.  It also works with the Arri Alexa and Sony F5/F55.   What you pay for this cable, and even perhaps for the wireless focus + cable will quickly justify itself in saved hard drive space and time on a set for high-bandwith users...very quickly.  If you actually realize that nearly 30-50% of the data you capture on an average MoVI move can be pre and post roll… it gets expensive!

Speaking of MoVI, Freefly has expanded rather quickly due to its success with the MoVI M10.   And to that end, if you order a MoVI M10 today… you will likely get it by tomorrow if you ask to have it shipped overnight (by their shipping cutoff time naturally, which is usually just after mid-day on PST time.)  The folks at Freefly are now able to meet orders right away after being backordered since it was announced in the spring of 2013 at NAB – which is exciting news for me to announce.

So if you’ve been on the fence about buying one for your production, you should know that you can get one without delay.  To find out more, read more after the jump below.   I’m working on really exciting project next week that I hope to share with you soon… but I might not get a chance to post until after the holidays.  If that’s the case I wish you wonderful holidays and look forward to seeing you back in the new year!

Lastly, if you’re looking for holiday stuffing stuffers for the holidays, don’t forget to check out my latest (pretty major) update to my gear section on this blog for all still photography and HDSLR/Cinema gadgets and "toys."

The team at Freefly is happy to announce that the MōVI M10 and MR stabilizers are now in stock and ready to ship. Our manufacturing team has been working tirelessly to increase our production capacity and get these units into our customers’ hands so they can do what they do best (create amazing shots). In addition to ramping up production, Customer Support has also expanded. We have hired two new Technical Support Engineers, who along with our Director of Customer Service, have answered an impressive ~3600 support inquiries in the 100+ days since our first MōVIs shipped on August 15th. We see such great questions every day, including shipping, functionality, and compatibility related questions. We are currently building a Support Portal and Knowledge Base with much of the information coming in, so that customers can choose to find answers on their own to save time. Since the overwhelming launch at NAB, we have been putting the infrastructure in place to ensure that not only can we produce enough MōVIs, but that we can support our customers and help them succeed with their MōVI.