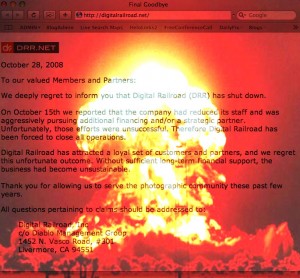 It’s no secret that I’ve been a fan of Photoshelter over Digital Railroad since the beginning – and the reason for me was clear:  I knew and trusted the people and the technology at Photoshelter.

Both are online photo storage sites where professional (and amateurs) store backup copies of their work online  – and in some cases originals. The idea is that having all of your work on your hard drives/RAID in one location is not the best backup strategy, storing them online on professional grade servers is a great idea – not to mention that both Photoshelter and Digital Rail Road (DRR) offer a variety of other services to sell your photos to others as well.

I know a lot of people who work for Digital Rail Road and have struck up good friendships with them – but at the risk of making enemies – I will say this:

Shutting down the DRR online storage site – and giving all of your customers less than 24 hours notice to retrieve their data – is ABSOLUTELY INEXCUSABLE.     Many companies (such as the VII Agency) have come to rely on DRR to run their businesses – and it’s outright irresponsible to expect them to be able to get all of their content off of your site with any notice shorter than one month – or at the very least a few days.

Then you add the fact that everyone will then try to download their content simultaneously – and your bandwidth will dwindle instantly – and your pretty much ensure the digital apocalypse…few if any will be able to retrieve all of their images in time – before the servers are shut down.   This is utterly irresponsible of them – it’s completely reprehensible.  It’s something they should revisit immediately.

The fact that they start up their apology letter with “To our valued Members and Partners” is laughable – but not funny at all.

Remember – these are sites where people back up their life’s work – their “best of” – their “keepers.”   Imagine the pour soul who just had their hard drive fail today – but has been paying to store his/her images on DRR – only to find them all gone almost overnight.   Or an agency that has invested hundreds of hours in keywording and captioning thousands of images on the DRR site… only to see all of that work evaporate in a day.   This is not good for them, for the industry – for anyone.

I’m not even a customer of theirs – and I’m infuriated.  In fact I’ve endorsed their main competitor for years * and if anything I should be gloating.   I’m a fellow photographer however – and I feel terrible for all of those affected.  I think that says a lot.

Here is what one poster on sportsshooter wrote:

“Very saddened by the closure of DRR. A few hours ago I received an e-mail announcing the closure of operations and immediately tried to migrate images to another site without success. All services of DRR are congested and saturated. Long queues of pictures waiting to move for syndication to other servers. Nothing react in time. It is shameful.

I live in Argentina, a country accustomed to bankruptcies and closures, but this is very serious.

How it is possible that DRR break? With so many good customers into their community making pays their membership on time? Who defends us from the scam?

In less than 24 hours I have to migrate nearly 10,000 pictures or resign itself to lose a lot of time to work.

There are some laws that protect us?”

The very least the DRR execs could do – is pull out their personal paychecks – and pay to keep the servers online for another few days – or however long it takes for people to retrieve their data – you owe it to your clients  – and to the industry.

From now on – do your research – before you entrust a company with your life’s work – and all of the time you will put into keywording and uploading those files.  Look at the technology they are using and how their company is being run.   There is a reason my work is stored on the Photoshelter servers.  And I hope that doesn’t come off as a sales pitch.

* Note:  I have endorsed Photoshelter since its inception – and have at no time been remunerated in any way by them.  I did initially get a relatively small amount of space from them to store my images and test their service – but have since then paid for my storage and the fees like everyone else.  I backed them because of who was running the company (their character) the technology they chose over DRR, the way they ran their business – and because I knew the founders personally.  I think it’s important to state that here as I give the furthest thing from a glowing review of DRR.