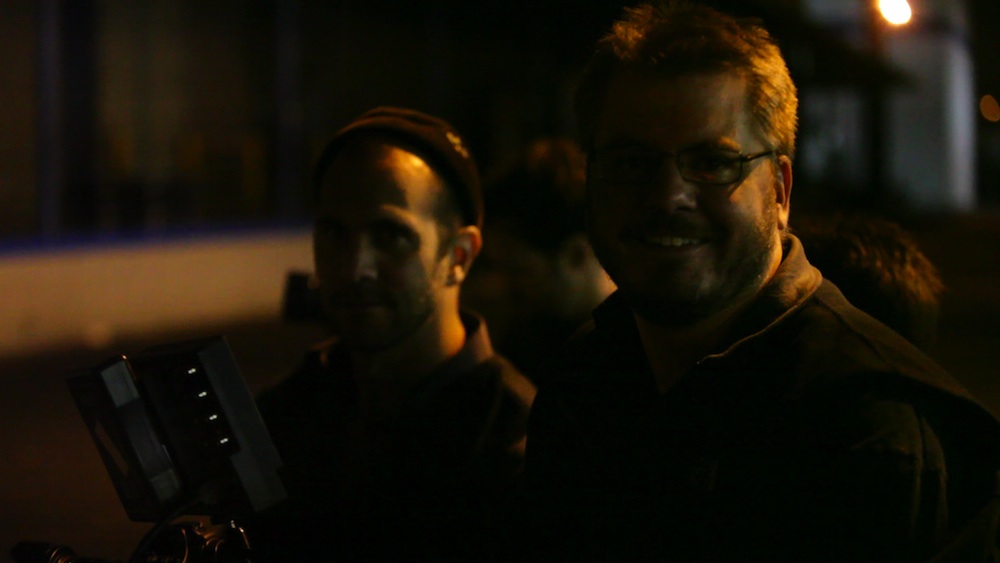 David Nelson and I - late late Saturday - or I guess that makes it Sunday - Morning. As a technical reference - this is a frame grab from a 5D MKII. The light was SO yellow we se the 1D MKIV to 2500K... and it was still yellow.

First of all – thank you for all of the positive comments (and a few of the nasty ones too!)

I wanted to clarify a few things – because I won’t have time to answer all of the e-mails / blog posts – many of which are asking the same questions.

First – I really want to give due credit to Stu Maschwitz & David Nelson – my co-filmmakers.  We agreed to work together (having more than one director is never a good idea – we all knew it – but we were too swamped with our day jobs to pull this off alone under such short notice) but things worked out for the best in the end.

Collaboration is a wonderful thing.  This film would not have been what it is without them.   I also want to thank Michele the producer – as well as everyone on the cast and crew.   Some of you may be rolling your eyes – but until you’re on this side of things, you may not appreciate just how much of a team effort filmmaking is.    The film is only as good as its weakest link – and we didn’t have a single weak link on this cast or crew – no matter how late in the morning it was.

Almost everyone had a day job to go back to after each night – often on other productions that lasted more than 10-12 hours…  Ben Nussbaum and his post house Pictures in a Row were exceptional.  Ben worked 5-6 days straight on this – day and night working in between his own projects.   He owns a huge part of the creative puzzle that made up this film.

So far – the film has been viewed at least 747,710 times (by unique visitors btw)  – that’s 17.22 TB of data in just 12 hours served up by SmugMug’s servers alone.  This blog crashed twice last night even though all of the pipes had been opened up… It never crashed on Reverie.  I am in their and Vimeo’s debt for donating their time and bandwidth to this effort.  It’s very generous of them.

A few answers to some common questions:

1. I do not have any plans of putting up RAW footage.  It’s simply too expensive to do so.  Perhaps Canon will decide to do so on their own.  I did put the RAW footage up for Reverie – but at this point I think that we can all appreciate that the camera can produce excellent results when run through simple grading and a slight noise correction.

2. I did shoot at the higher ASAs on my own – and the footage is usable – it does have more noise in it (obviously.)  That being said – I had a hard time finding any nighttime scene that required anything higher than 6400 ASA.  Anything beyond that and there really isn’t much light to see anyway.  Although I did of course make a point of not using any artificial light sources that I could have added in – that doesn’t mean that I want to shoot in poor light.  In many ways this was a proof of concept shoot.  Yes: shooting at night w/ existing light is possible.  That being said – I still like the approach of the lighting in Reverie best – adding a small amount of intelligently placed light is key to achieving the best results.  What this cameras does is offer you to not have to flood the area with light – but to balance the added light with the available light – balancing the two is always key in my opinion.  To date few cameras have allowed us to try to balance low light w/ artificial light of course – as most were simply not sensitive enough. 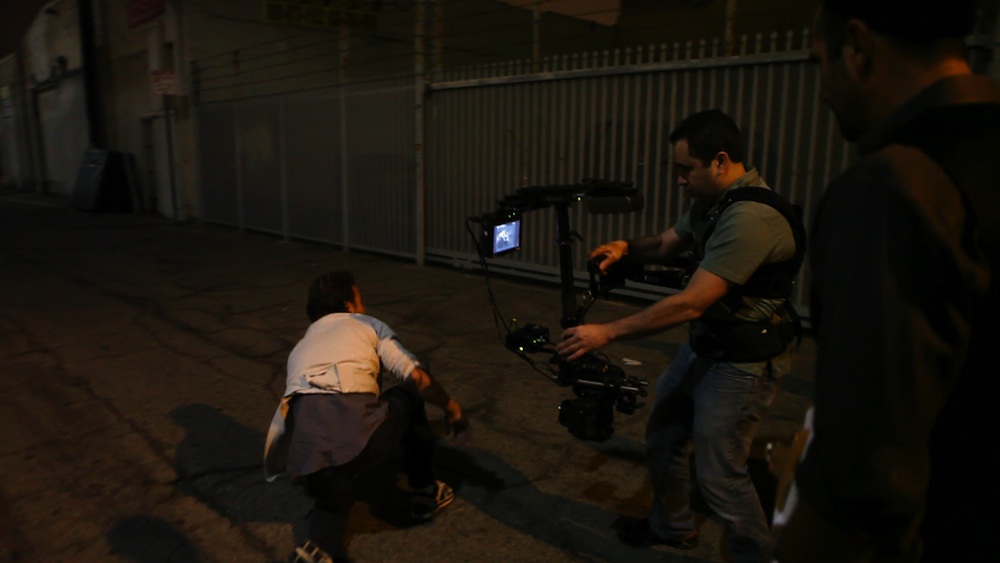 3.  Yes – I agree – Reverie was indeed “Cheesy.”  I’ve called it a bad cologne commercial for a year now every time I discuss it.   That being said – it was the best I was able to pull off with less than 24 hours notice and I will always be proud of it for what it was.   People who criticize it’s lack of plot really don’t get it.  Trying to make a Kubrick film with 12 hours notice isn’t going to pan out – it’s important to always set realistic goals given the time and resources one has at one’s disposal.

I purposely chose to stay away from a lot of motion in Reverie because: a. I had no cinema gear to help stabilize the camera b. I was afraid of the “jello” effect that I knew was inherent in CMOS cameras.   Basically:  I knew better. I think it’s always important to understand the limitations of one’s gear – to avoid those pitfalls, and to maximize the inherent qualities of each piece of kit.  Pushing the limit is always a goal of mine – but knowing how far I can push and where things can potentially “break” is just as important if not more.

Nocturne is a fun little movie – it too is not meant to be a narrative masterpiece.   Good dialogue takes time – finding good actors is key.  Once again – we only had a few days notice.  So we decided to have a little bit of fun.  One of the most important lessons that I learned as a news photographer is that: CONTENT IS KEY.  Therefore I believe that no matter how beautiful a film is shot – it is worth little to nothing without a good plot.  That is why I believe in working only great concepts, with great screenwriters, and with the best actors – whenever time allows.    A lot of that cannot and should not be rushed.

4.  I have not had a chance to try the AF of the camera.  I have heard that it works great – better than any Canon camera out there.  For this project – I spend my time solely focused on the filmmaking aspects of the camera.

5. The “rolling shutter” or “jello” effect – is significantly improved over previous models.  So much so that we did not hesitate to handhold the camera and do “Bourne-like” moves.  It’s close to being a non-factor – but the effect is still there when you shoot extreme whip-pans (that would be unusable on a 50 foot screen regardless of the camera it was shot with.) 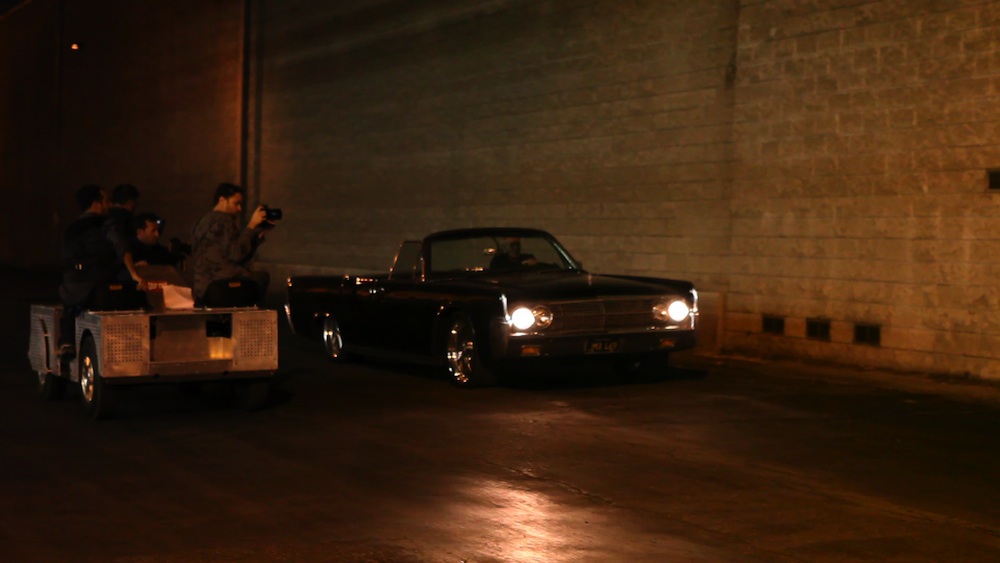 Here we are on the GripTrix car - really cool toy. And YES - that is indeed Johnny Drama's Car from Entourage and the opening credits. Kudos to Michele for finding that one!

6. We will be releasing a behind the scenes short today or tomorrow.   You will notice that this was not a 3 person crew.   We didn’t have permits or much in terms of funds – but I did pull some favors to get some neat toys out there.  It doesn’t matter if you’re shooting with a digital Elph, 5DMKII, ARRI, or Genesis:  you need to spend money on stabilizing the camera to get a professional look.  Period.  The advantage of the HD-DSLR series is that they are much lighter than other cameras – and can do amazing things with significantly cheaper rigs.   I will be discussing this in much greater detail in an upcoming series of videos on HD-DSLR cameras – if you would like to be notified of it’s release (before the end of the year) pls e-mail me at production@vincentlaforet.com – with the word “NOTIFY” in the subject and I’ll ping you when it’s available.  We are currently in pre-production on the series.

7. Some of you may notice the word “Nacht” which is German for “Night” on one of the street signs… this is one of Stu’s influences.  He couldn’t resist it – and I love little touches like that… Stu is an extremely talented filmmaker and visual FX artist.  He is also the author of a fantastic book that I own and have read numerous times that is applicable to any filmmaker who wants to break the mold:  The Digital Rebel’s Guide. You can follow his version of events on his blog here as well – a blog Prolost – that I have been reading daily for over a year.

8. Two common details that people are bringing up:  yes we did notice the shadow in the form of the cross – being cast by the light pole and modeled a shot around this rather fortuitous event.   We were also well aware of the car shots being “flipped” – word to the wise: never go into production with a storyboard that is 95% done… or you’ll be forced to make decisions like this.   Given the time we had to prepare – I’m amazed that Ben didn’t have to make more of these types of compromises.

9. I haven’t done scientific testing.  But basically I’d wager that you can expect a 2 stop improvement in terms of low light performance/image quality with the 1D MKIV relative to the 5D MKII.

10. Much to my chagrin – the camera does not output full HD out of the min-HDMI output.  I am not at all a big fan of the HDMI output that manufacturers seem to be adopting.  The cables break far too easily, and do not stay seated in the their ports – in fact unless supported they will pull themselves out of their own ports with their own weight alone.   HDSDI is the only output Canon should consider for future cameras- having to work with (and convert) HDMI is a production nightmare and expense.  It’s doable  – but a pain.  That being said – the output no longer drops when you go from LiveView to Recording mode.  That’s significant improvement – the image looks noticeably sharper.  It’s now possible to focus with a long lens – almost critically on an external monitor.  Wideangle lenses are still tough though.  We need HD output and RAW output BADLY.  Once this happens – all bets are off.

11.  In case you haven’t heard – Canon just announced a firmware update that will allow for 24p/25p/60i – which is fantastic.  So no need to get rid of your 5D MKIIs just yet – both they and the 1D MKIV had specific advantages to one another.  I can see myself using both.

p.s.: I’ve gotten 2,732 e-mails today and my inbox already had broken the 2,000 mark prior to this… so pls be patient.  If you are trying to reach me for any work related request – pls contact my agent Stockland Martel directly.  I apologize to my friends especially – for not being able to get back right away.  I will also be busy at the Photo Plus Expo this week in New York City and I am Directing/DPing a network television job next week.  So it’s pretty insanely busy regardless of Nocturne.