The Drone you’ll always have with you: The DJI Mavic Pro 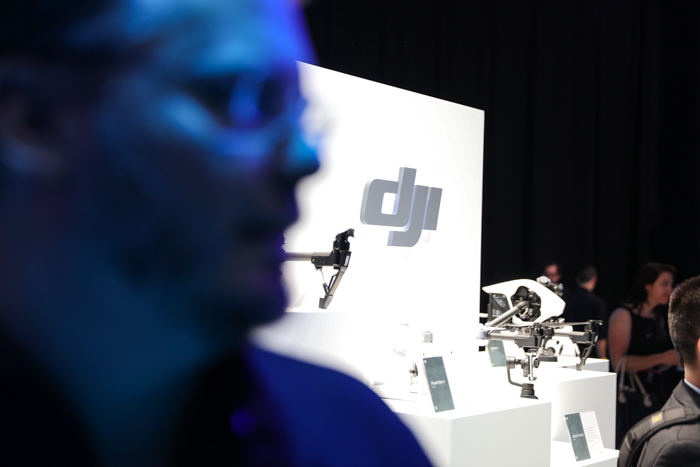 Now… you can’t EXACTLY put the DJI Mavic Pro in your pocket – although you CAN put it in your cargo pants pocket (my friend tried it and it fit) or a winter jacket pocket – but that’s a major shift in drone technology that’s hard to ignore. Check out the video of the launch event and some fun flying around the Brooklyn BMX track in Williamsburg:

Until now, you had to dedicate a bag, backpack or your carryon to JUST a drone and accessories.    That has forever changed. 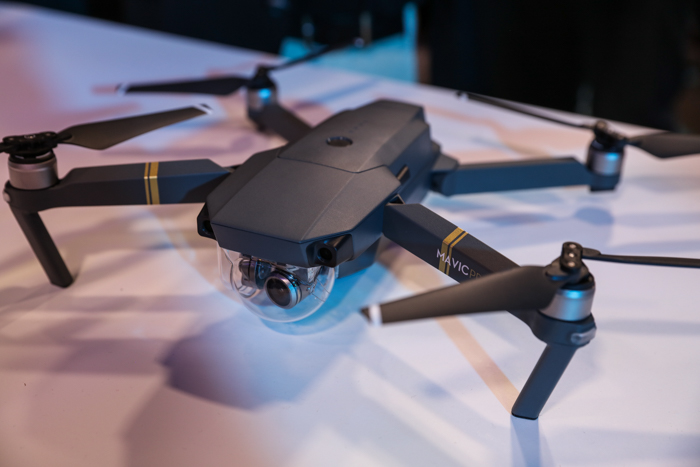 I had the chance to play with an early prototype Mavic and what I can tell you that struck me the most about this drone was not just it’s bevy of features – but it was the fact that I had it with me ALL the time and that was a first for me!

Many of you know I keep my iPadPro and MacBook in a Tenba bag with me at all times, with 2 Think tank accessory pouches … that’s how I move around and travel the world.   I usually have on slot open in that bag for my Leica M9 or a Canon 5Ds … and then it’s full but not too heavy.

I can now decide to throw the Mavic in there in one of the 3 slots I have in the front of the bag, w/ 3 extra batteries and a charger and I’m off to the races.  And that’s AMAZING. 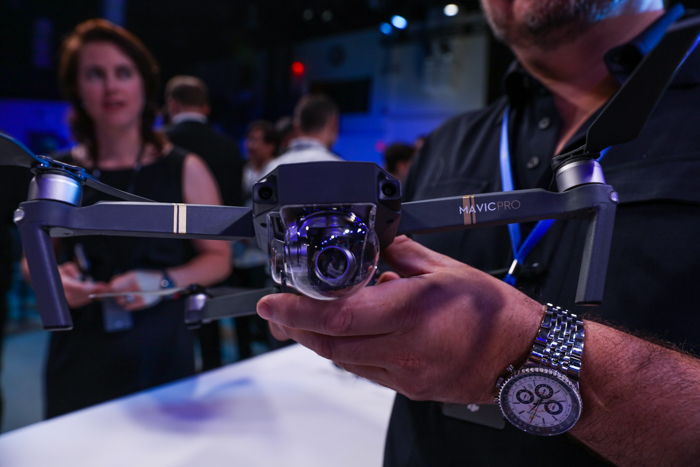 I see myself traveling with this little drone all around the world – both for professional uses (notably to scout let alone capture footage – although I’m likely to use the Inspire or other systems for high end use of course) and also with family.

I’ll predict that this will be THE stocking stuffer for all geeks and drone enthusiasts out there this holiday season.

Many of you have seen GoPro’s recent announcement of the Karma drone.   It’s definitely a wonderful drone and I’m sure will find a nice home within that GoPro ecosystem for many.    My reaction was that it felt 1 if not 2 years late to the party given it’s size (it takes up a full size backpack of its own) and also the lack of features relative to DJI.

What differentiates the Mavic from all other drones is the sophisticated technology jammed into a small body.  In fact this is the single most stable drone they’ve ever produced with the exception of their high end drone… think about that for a second!

The obstacle avoidance WORKS!  (But it you put it in the zippy SPORT mode where the little guy flies at 40 MPH it won’t … so careful!  They’ve turned if off so that you can fly this little devil as fast as possible…)

I’ve tried to crash it into trees – and it stopped.   It’s impressive.

It takes a video of the ground from which it takes off – so it can precisely land exactly where it took from if you lose a signal, or if you use the automated landing position.  Within inches.  Also: if you try to auto-land on uneven ground, it stops the landing and allows you to land it manually automatically. 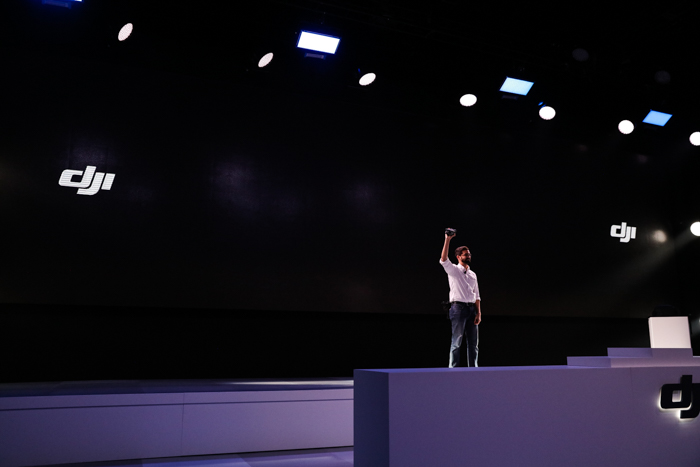 Even takeoff is easy – you have it take off automatically with the push of a button and it hovers in place waiting for further input from you.    Everyone will tell you that takeoffs and landings are the most stressful parts of flying drones (and most things!)   Basically, if anything goes wrong, just let go of the remote and it will stay in place – more precisely than any other drone I’ve used.    And it’s quite impressive even indoors w/o GPS … something I would never try myself, but that DJI confidently did on their demos today in a packed house… speaks to the trust they put into their system.

Then there’s a bunch of features that you can look into – but the most important ones to me are the tracking features.

With the use of an iPhone/Smartphone (you can fly this drone w/ JUST a smartphone and the drone’s WIFI link, or with JUST their video-game controller type remote, or with the phone + remote!)  you can easily track people on the ground w/ “Active tracking” and get amazing results.

You point to the person on the the iPhone screen w/ your finger… it locks on … and you can let the chopper automatically follow, fly behind, do loops around, or lateral moves (slides) … it’s PRETTY INCREDIBLE.   And they’ve got a fancy more dynamic mode as well.   The little guy also has terrain avoidance modes and is just fantastic in terms of giving you as safe of a flight as you can expect (and yes it’s aware of airports and no fly areas etc…)

Frankly if someone told me this was a military drone that fell out of the sky that we were’t supposed to see for the next 5 years – I’d very honestly have to wonder if they were pulling my leg or not, given how packed with features it is, and how easily it tracks cars / people / pets … a little freaky to be perfectly honest.   It will even avoid obstacles actively when it follows a subject… talk about “fire and forget…”   EEEEK!

But you can also of course take over at any time and fly your heart out!

Last week I locked the Mavic’s camera onto my son and daughter in a large (empty) soccer field after a game had ended.    And I performed complex camera moves around them – with the camera staying locked onto them the entire time.   I was sold immediately.  It never lost them once.    While this (and no system) is perfect of course, the tracking functions are quite impressive relative to anything I’ve seen.   Most importantly – for the first time in flying a drone, I was able to concentrate 100% on the flying of the drone above my kids heads (and never seeing the drone dip down or lose altitude which is obviously important!!!)  and the iPhone app did the rest …  and that’s SUPER impressive.   It’s going to put the focus back on the safe FLYING of the drone, as opposed to trying to mix flying and filming together (which should NEVER be done – you should always have two independent people doing this.)  That being said – with the Mavic, you can let the computer frame your shot as you do the one thing you should be doing:  making sure you’re flying safely.

Of course  the Mavic has some other tricks up it’s sleeve … if you wave at it, it will lock onto you and track you (a little creepy to be honest) but you’ll get confirmation with blinking red lights that’s it’s following you (and you won’t be able to ignore that it is.)  For the Selfie generation you can make a frame with you hands in front of your face and it will take a photograph seconds later after the same red lights flash rapidly…  impressive.   It’s like having a little pet that follows and films you in many ways…

Overall this is the most impressive and portable drone that I see the everyday person being able to use safely around the world (and much more safely than other drones given the numerous hardware and software safety features.)

Beside being durable (the unit I was given had visible crash marks from previous users) its just plain transportable, almost an afterthought!   And the little bubble you see in front of the lens is removable btw … it’s just meant for transport!   Blades can be easily swayed out to and fold easily in your bag.

Speaking of the camera / gimbal.   Just as impressive.   Sharp as heck at 4K and it shoots both video and RAW DNG stills.  Amazing.   It’s a 28mm equivalent (as opposed to a 20 mm equivalent in the Phantom series) and pretty darn perfect for aerial shots.   It also does much better than I would have thought in low light.  (I had an early model so I won’t make any definitive quality statements until I get a production unit other than to say:  I was amazed by the image quality and was impressed with the low light performance as I filmed my kids well after sunset albeit with stadium lighting.)

OK – that’s it!  Here’s a mored detailed list of specs…

The only thing missing?    Well given how popular these will be, and how popular the Mavic will continue to make drones in general…  DJI and others are missing one feature:   being aware of other drones and avoiding air-to-air drone crashes…  I’m serious.  It will become a necessary feature I think at some point for drone parks etc…

Oh and ONE MORE THING!     The headset!    I haven’t been able to use it in flight yet – but man … talk about living your Top Gun dreams with two of these and flying these first person… that’s going to be AMAZING.   The headsets are sharp and work w/ HDMI input from ANY source … again: Impressive!   That’s definitely going to happen in my near future with friends… talk about a whole new way to drone w/ friends.

A lot of people are gonna have a LOT of fun with these… so please:  Drone responsibly.    Be mindful of others and consider getting your Part 107 certificate from the FAA so you’re aware of the rules of the sky:  it can’t possibly hurt you to do so. 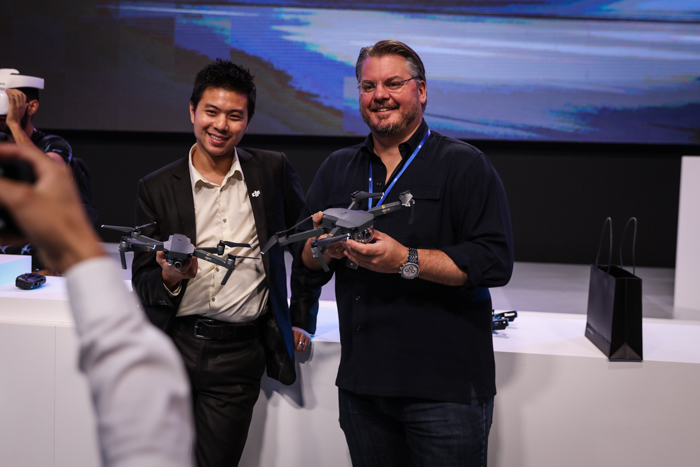