Next Step: Calling All Screenwriters and Storytellers 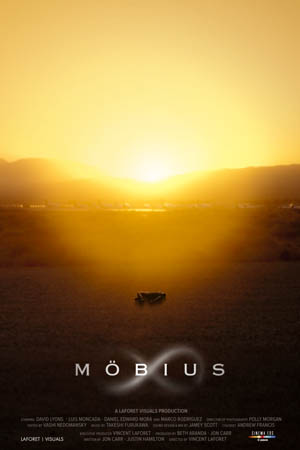 IMPORTANT NOTE:  DUE TO THE POVERWHLEMING RESPONSE TO THIS CALL TO ACTION  – WE ARE TEMPORARILY NO LONGER ACCEPTING SUBMISSIONS as we begin the process of reviewing submissions to date.

We will announce when we re-open the submission process.  Thank you – Vincent Ladoret

Now that “Mobius” is out in the open I’d like to send a call out to all screenwriters and storytellers.

During the past 18 months, and as a result in part of “Mobius” – I have had a chance to meet a lot of people in the film industry.

As of yesterday, executives at two major studios, a few key senior creatives at a two large agencies have expressed interest in doing a variety of projects – all the way up to feature films.

I am obviously incredibly excited with those prospects – but the one key ingredient that I am always on the lookout for is a great screenplay or idea.

Given the traffics that this blog gets, I have been waiting for the right time to put a call out there to screenwriters and fellow creatives.   My goal would be to keep this idea out there long term.   And here it is:

If you have a good idea (either in treatment form, or as a screenplay – in either Word, Pages, or PDF form) kindly consider sending it to the e-mail address: production (at) vincentlaforet.com  – PLEASE PUT EXACTLY:  SCRIPT SUBMISSION in all Caps in the title/subject of your e-mail.

1.   _You will retain all copyright and ownership of the material submitted.  By submitting your script or idea – you make zero commitment to me or Laforet Visuals Inc. in any way.  There is no obligation to follow through on either end.  And you are not making any guarantee of exclusivity whatsoever.  You are free to do submit the same screenplay to other parties.

2.     _Your screenplay will not be shared with anyone else outside of Laforet Visuals Inc. or on this blog or anywhere else without prior written confirmation from you.

4.    _ All rights, fees etc. will be negotiated once we mutually agree to move forward together on a project.

5.     _My goal  is to make this as close to a zero risk offer to screenwriters and storytellers that I can make – with no downside potential whatsoever.

6.     _ If you do not have a screenplay – but know of an incredible story, or one that you’d like to have adapted – I welcome that as well.  I do know a few extremely successful and talented screenwriters – not to mention studio heads with a wide array of talented people at their disposal.

Lastly – I’m adding this point after the fact:  I am fully aware that there are legal ramifications with soliciting scripts in the manner.  I always have been.   I do think that times are changing and that new business models, and ways of discovering talent, ideas and people are burgeoning as a result.  And I am embracing that fact and moving ahead.   I may need to forward your script to a third party first (an agent) prior to contacting you.  Either way – I will get your permission to do so should that be necessary.  This request is  but a first step.

I have already received 50 submissions today alone.  So kindly don’t expect a reply until we’ve been able to read through the material.

Lastly – and most importantly – this is an open call that has no short-term deadline.   Consider this an open ended call to entries long term.

I’m Many of you may not know that you can register and protect your screenplays (and ideas) by going to the WGA and others.   This gives you a good piece of mind that the scripts your send out won’t be turned down and mysteriously appear on screen with some other writer’s name in the titles a year later.   I recommend you do so for all of your work.

Here are the three types of content that I am looking for:

1    _30-60 second spots.   Companies are regularly coming to me to do promotional videos for them – including ad agencies.   These are all too often last minute – and rarely allow for the development of a good script.  Having a few at the ready is a good thing.

Basically, the idea is to find either established, or undiscovered talent out there who’d like to see their work on a screen (on a TV, a computer monitor or on the silver screen) through the power of crowdsourcing on the web.

I know there are a lot of talented people out there who have great ideas/scripts that would love to work with a group of talented filmmakers and actors out there.

The idea is to bring people together.

This has the potential to be a part of a much larger project that I have been discussing with a few companies as well.

The story / idea / screenplay is the genesis of any spot / short / film.     I am a firm believer that a great story is at the heart of every great film.

Lastly – a little about my tastes:

And for what it’s worth, here are some of my favorite films for reference:

Brazil – for its incredible originality and incredible ability to hit on what the future could potentially bring.

Boys Don’t Cry – for how incredibly raw, relevant and impactful the story was.

Bladerunner – an incredible visual journey and look into the future.

Full Metal Jacket – the best first half of a film… incredible characters and dialogue.

Close Encounters of a Third Kind – made me want to become a film maker.

Tree of Life – incredible visuals and wonderful look into the tensions between a a son and father.

Chariots of Fire – wonderful story based on historical facts.

Malcolm X – I loved the book, the film, the true story.

Pretty much anything with Robert Deniro in it.  Especially the early stuff.

Let’s see what happens…  as I said: there is the potential for this to be a part of a much larger idea that is already underway.  More to come on that at some point…