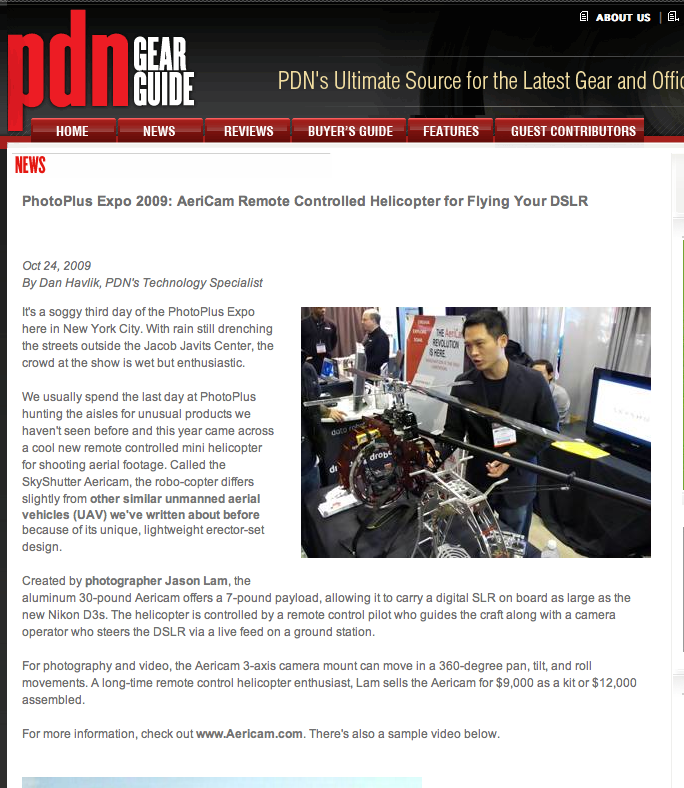 I’ve been debating a bit on whether or not to post this one – but I think it’s necessary – so here goes:

New technology is great.  It allows us to do things we previously thought impossible.  It empowers us to “push the envelope” if you will.

That being said, one of my favorite axioms came to mind after I read the PDN Article at left, namely: “Just because you can – doesn’t mean you should.”

First – I should say that I don’t know Jason Lam (the person selling these helicopters) nor is this aimed at him or critical of him.  Jason has EVERY right to sell his services and helicopters – unequivocally.

But I do think it’s a tad bit irresponsible for PDN (and perhaps Jason’s site as well) to fail to mention two very key things in their article/site:

1. Flying a remote control helicopter over New York City (as in the island of Manhattan) is ILLEGAL. (w/o a special permit – which is virtually impossible to obtain due to safety concerns.)

2. It’s extremely dangerous to fly such a helicopter (1. in general and 2. especially over a heavily populated place such as NYC.) Think of a flying blender if you will… if the operator/pilot makes a mistake the thing will crash or worse maim someone.

God forbid an errant radio signal interferes with the helicopter’s signal and the thing goes haywire (these things don’t exactly float down if you catch my drift.)

What I’m trying to say is:  you can kill someone (or yourself) if you don’t know what you’re doing.  Trying to fly a helicopter and trying to take pictures as well – is more that twice as dangerous!

OK – so let me back down a bit.   First I know that PDN is simply listing this new piece of kit as they would any other piece of equipment.   Jason Lam is also selling his services.   Both have EVERY right to do so.

What bothers me is that I haven’t seen a SINGLE mention anywhere on either of the sites that relates to how dangerous these helicopters can be when put in inexperienced hands.

I felt the need to point this out, because as many of you may know, I employed the services of an RC helicopter and it’s pilot, Tabb Firchau during my filming of the Jamie O’Brien doc earlier this year.   I show this video during many of my seminars – and someone will invariably run up to me at the end of my talk and ask where they too can buy such a helicopter ASAP… and I tend to cringe a bit.

I think it’s important for me to mention that Tabb flies REAL helicopters (the big ones) and has done so for well over a decade.  He’s put in thousands of hours to hone his skills as a pilot of big and little helicopters.   Therefore he’s put enough practice into it to safely be able to fly and shoot with these little technological marvels.

I myself have landed a small plane (I started but never completed my pilot’s license) and have hundreds if not thousands of hours in flight simulators.   Yet I’ve never set my hands on another friend’s RC helo remote… I haven’t even asked out of respect.   Why?  Because when you start to fly RC helicopters – it’s not a matter of if, but how soon you will crash it.  This is the same reason that while I am a certified Rescue SCUBA Diver – I refuse to shoot and dive without a dedicated person who is more than just a “dive buddy.”  It’s simply too dangerous to try to balance the two simultaneously without a LOT of practice.

So I felt responsible for saying that – I hope that’s OK.

On a final note:  as these new technologies continue to role out – it’s important to realize that our most valuable asset are the people who know how to use them best.  I.e. our most valuable assets are skilled people – i.e. professionals.  That too often seems to get lost as everyone seems to think they can do it all “themselves” as they become instantly “empowered” with these new gadgets or technologies.   I think that while we should all jump at the change to take full advantage of these new things – we should remember that we need to be responsible in doing so.   We need to remember to do our research – to learn about them and treat them as a craft – especially when safety concerns are present.

Therefore if you’d like to fly your DSLR below and RC helicopter – I suggest you hire a professional like Tabb to fly the helo for you.    The same goes for pretty much any other thing in the industry:  i.e. if you want “fly” your DSLR on a Steadicam – I suggest you hire a great steadicam operator and 1st AC/Focus puller – they are worth their weight in gold.  (More on that in a later post.)  If you want to do it yourself – don’t forget that mastering these things takes weeks if not years of experience, and that hiring a professional will save you an incredible amount of time on any production for example  – i.e. good people pay for themselves very quickly… 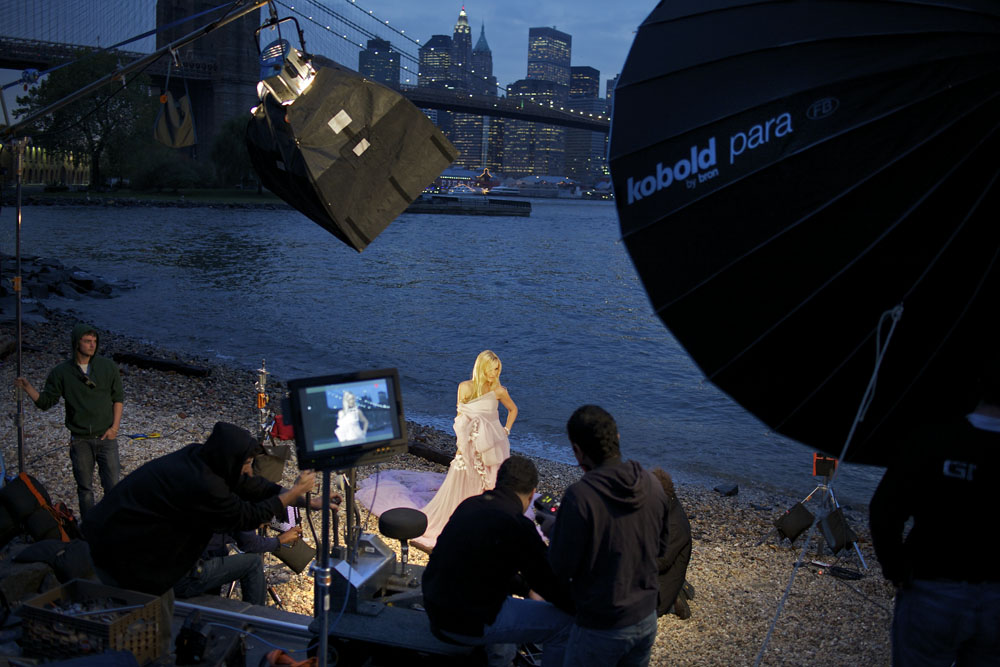 To some... this scene may look a wee bit familiar... this time it's safe to say the crew and technology was a wee bit more advanced than "Reverie" a year ago (the shot above was made last night)- but on the same spot... more info to come on this shoot as soon as I can release it!

Oh heck… I’ve been meaning to write about this for a long time as well – so here goes:

These days we’ve all been feeling the budget crunch.  While things definitely feel like they’re getting better in terms of work these days – I’m worried about the long term effects of the budget crunches (will they ever go back up once they’ve been squeezed down?)

That’s a whole other post – but there is one thing I do want to say:  if you need to cut back on things and to make space in your budget, I would suggest you do the following:

Use new technology to help you cut costs – i.e. the new DSLRs will help you save money b/c they are more sensitive to low light  – and you won’t need as much light as you might previously have needed (in some situations of course – not all.) 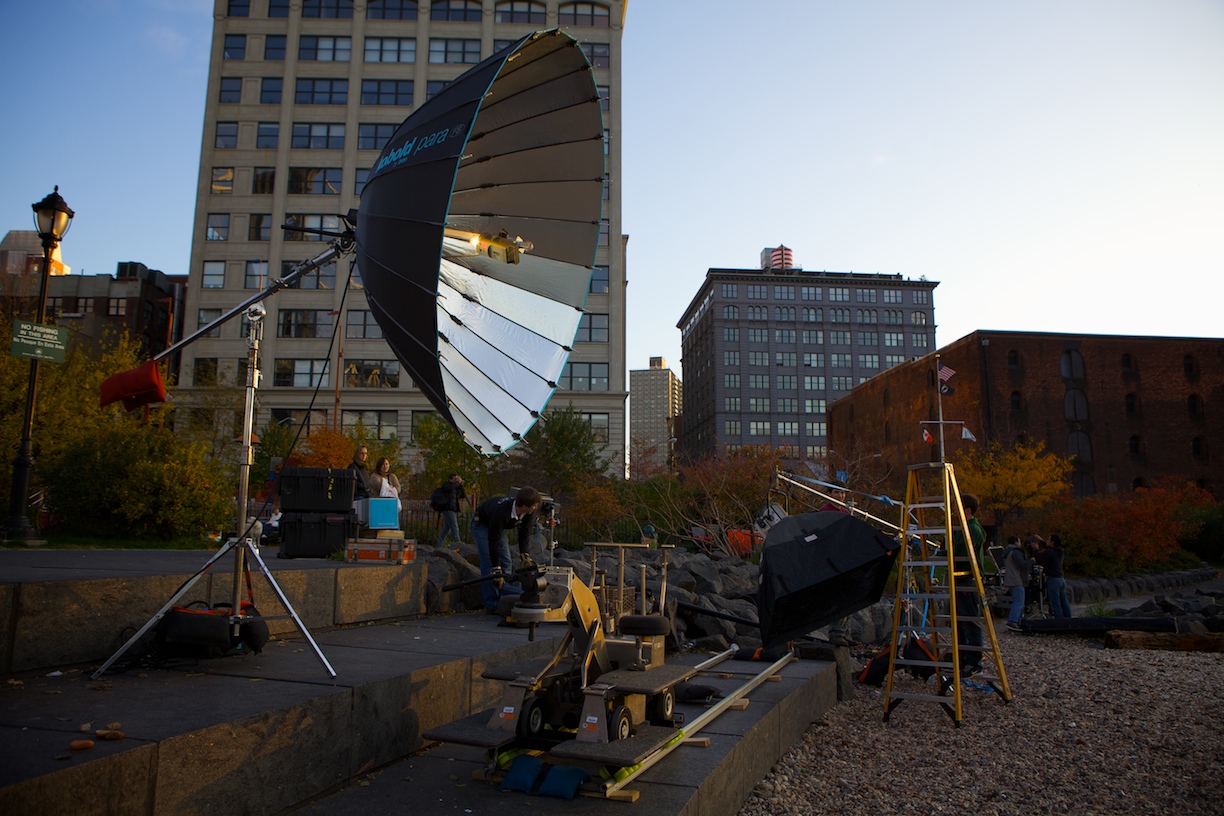 Bron's Kobold Para's series of light modifiers are a new favorite - basically they are one great solution to reproducing the type of light that every still photographer would associate with an Octabank. The Para can do strobe, continuous light - and either Tungsten or HMI light... A/C or battery operated.

So perhaps you can spend a bit less on your lighting package now.

Here’s where you should NOT skimp:  PEOPLE.

This is such a basic thing that we all know – but it never hurts to repeat it – especially these days.

Just last night – I was shooting the intro piece for an upcoming show on network television in NYC (more to come on that when I can release it.)   The best thing that I did was to hire a top Steadicam operator (and DP) Charles Papert (who I flew in from LA) and a top notch 1st AC/Focus puller Walter Rodriguez (who is NY based.)   I spent a good part of my production budget on those two gentlemen – and I don’t regret it for a single second.  Why? 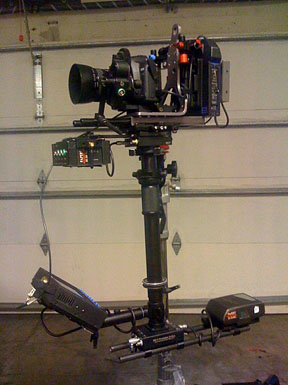 I have access to a Glidecam – and several operators that I know in the NYC area were available with their own professional rigs.

But Charles and I have worked together to get his rig working with lots of very cool gadgets (wireless focusing rigs, wireless video transmitters etc.) and we have the system down.

During yesterdays’ production – things went off without a single hitch (amazing given that we have a lot of custom-made pieces that we threw into the mix.)

The Steadicam work was flawless on Charles’ part, the focus pulling dead on – and we were able to go from shot to shot – nailing them on the first or second try, time and time again.  Even better – we were able to push the envelope not just technically – but artistically… when the producer tells you you’ve got the shot on the fist try with a huge smile… instead of begging for more time for fix what could have been a bad first take – you don’t hesitate to suggest you try something more original or daring on the second take…

Spending that extra bit of money on Charles (and flying him cross country) and Walter was worth every penny in my book.  Because we had close to 30 people on set – and 7 “talent.”

When you think of how much money you’re losing every single time you miss a take because of the operator’s inexperience (either in terms of their personal experience level – or their familiarity with the (often prototype)  gear) you realize that they pay for themselves within the first 15 minutes they are on set.

Had to say that.  I hope it’s received well.