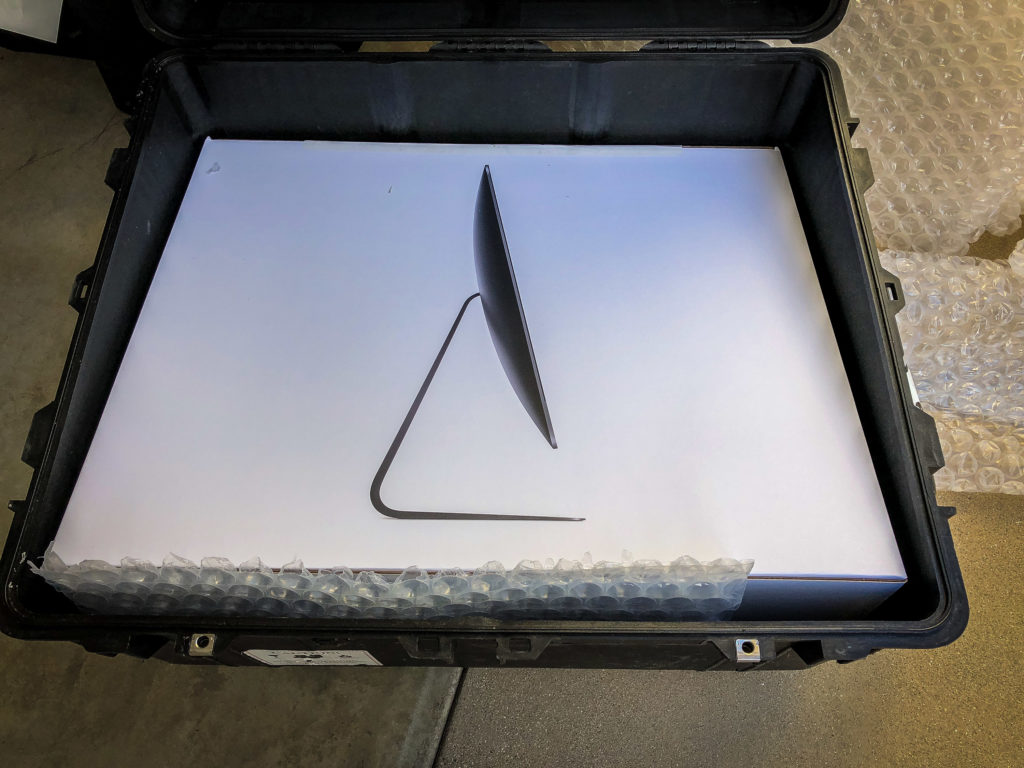 Last week I received a pelican case from Apple with a very special Mac inside of it…  It was an iMac Pro configured as a 10 Core 3GHZ Intel Xeon W, 2TB SSD, 128 GB RAM, Vega 64 Radeon.

After unpacking the (to be expected) beautiful Space Grey hardware, keyboard, mouse and trackpad, it was time to get down to the brass tacks, I had ONE question that I needed to answer:  how fast is this thing, and how much time will it save me in my everyday imaging tasks?

I found a very consistent set of results:  a 2X to 3X boost in speed (relative to my current iMac and MacBook Pro 15”) a noticeable leap from most generational jumps that are generally ten times smaller.

I’ve seldom seen a jump this dramatic before on any new generation of Macs – 20%-30% speed increases are the norm … NOT 200%-300% increases.  That’s SIGNIFICANT.  (Feel free to jump straight to the test results below if you have a short attention span or are a numbers person..)

Basically, if you’re debating whether or not to purchase the iMac Pro you should ask yourself just one question:  how much is your time worth to you?   Would you rather be waiting for images and video to render or export, or do you want to go back out and shoot as quickly as possible?   For me the answer is easy:  when compared to the previous generation iMac or the current top of the line 15” MacBook Pro, the iMacPRO tears through footage and images, allowing me to spend less time behind a computer, and more time shooting.

After just under a week I can tell you that I won’t be using any other mac anytime soon.

I’ll detail the result below for every piece of software that I ran these tests through – because at the end of the day it’s all about the numbers when you’re shooting 1-5 Terabytes per day of 8K RED footage,  or shooting 7,000 fifty Megapixel stills on a Canon 5DsR, let alone churning through 8K VR footage or playing back 4K MavicPRO footage.   It’s safe to say we’re shooting and processing more an more data than we could ever have imagined just a few years ago – and one’s time behind a computer can be a TRUE pain point.

In short – this is a KILLER machine for any serious photographer, filmmaker, or VR producer.  Period.

I can see a lot of people taking advantage of the nearly 3,000 MB/S transfer speeds to the internal SSD, let alone the four Thunderbolt 3 ports to go thru footage much less painfully.    In fact most of the drives cannot come close to taking advantage of the transfer speeds – YET.   However when you copy multiple media at once to a fast raided drive you’ll quickly see the benefit of this machine.   DITs (Techs who copy cards on still or film sets) will love this machine for its portability and speed (and easy to swap base w/ VESA mounts that can transfer back and forth much more easily than the previous generation iMac.)

I could go on an on about my thoughts on the machine but I think it’s time to cut to the chase and give you the empirical NUMERICAL results: 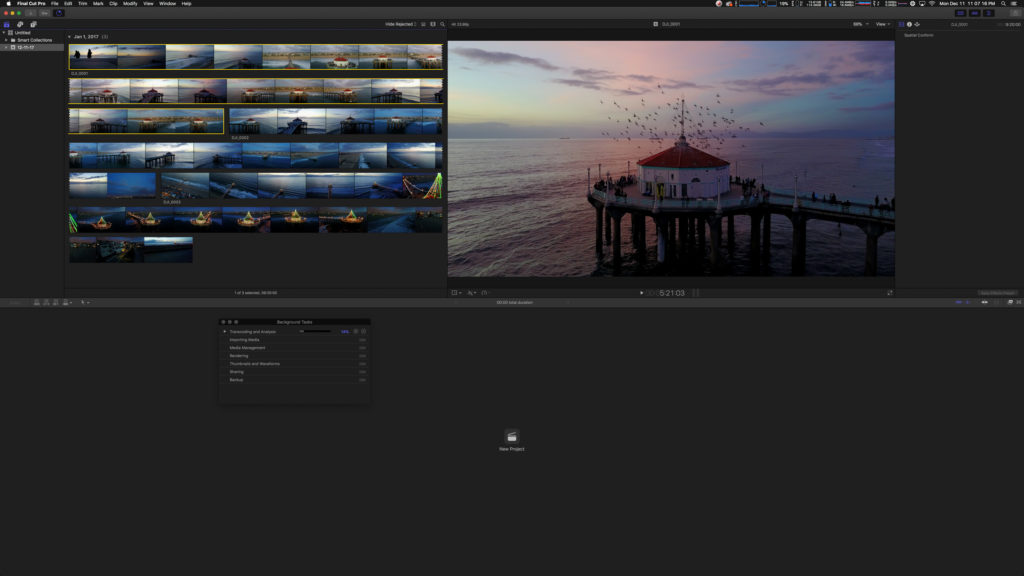 All 3 machines created low resolution Proxy footage in under 8 minutes which was impressive.

I then had the software render ProRes422 Optimized media from the H.264 source media: 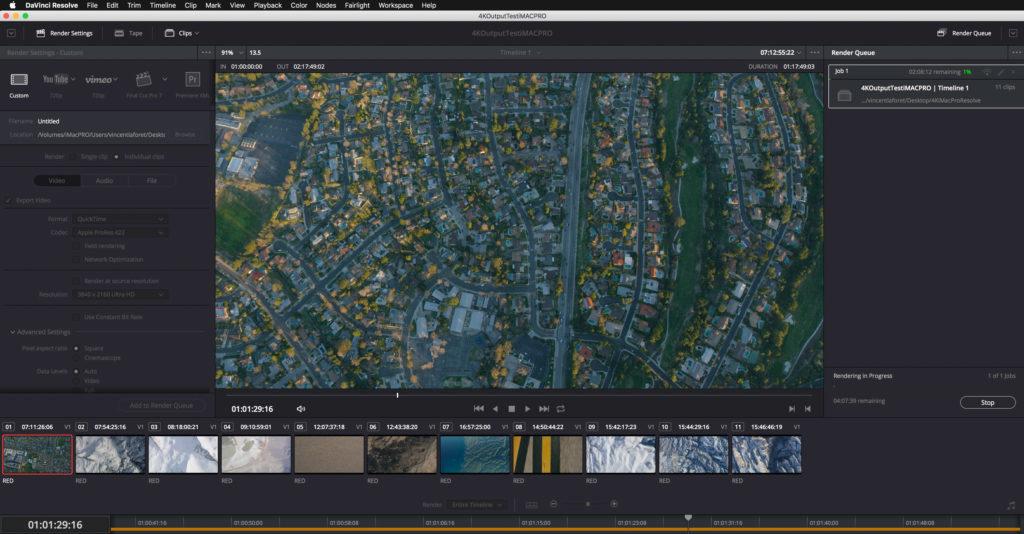 In Black Magic’s DaVinci Resolve, I imported 1 hour and 17 minutes of RED 8K Helium Full Frame footage shot at 60 fps and exported it to 4K ProRes 422 footage, here are the resulting export times: 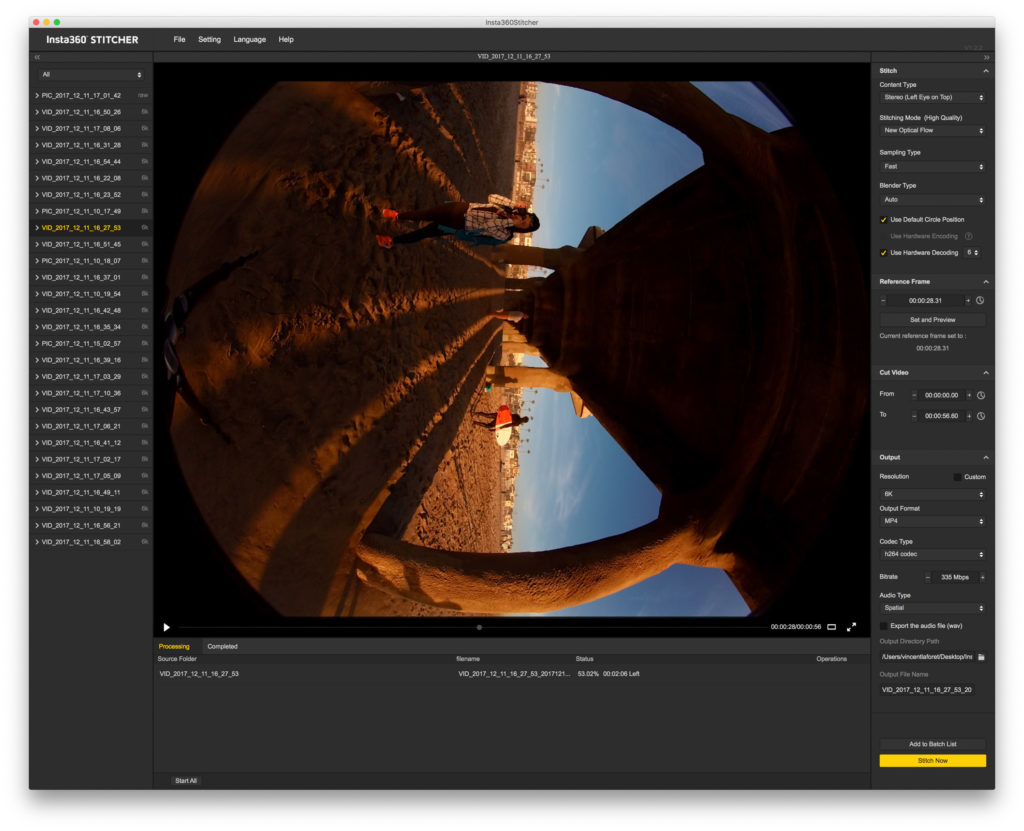 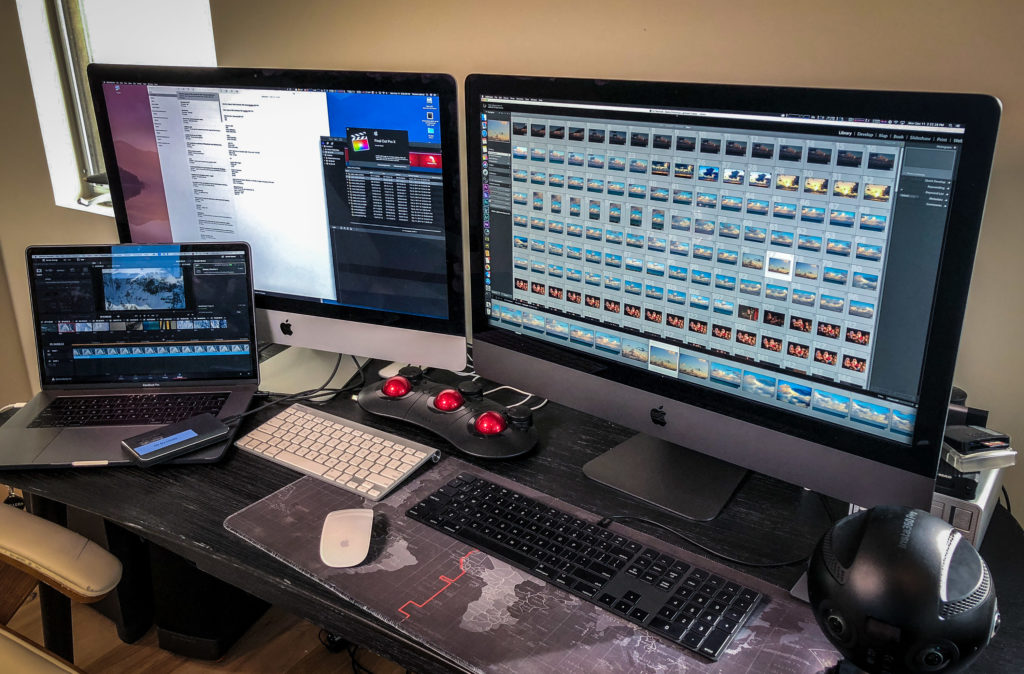 I had LR build 1:1 Previews

I applied a look (color correction in the Develop module)  and Exported 788 JPEG files at full resolution or 14.79 GB of JPEGs averaging 9 MB each 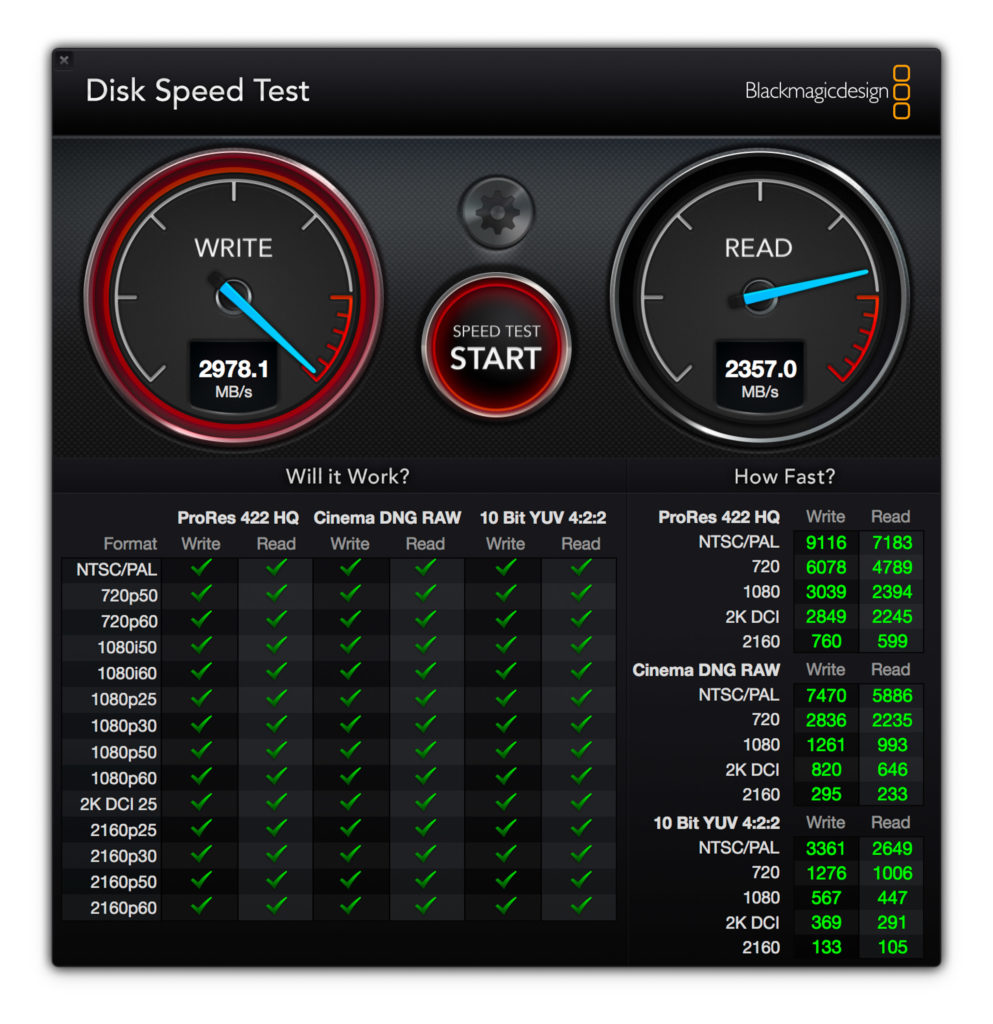 I ran Black Magic’s software to test the speed of all 3 internal drives and found the following average speeds: 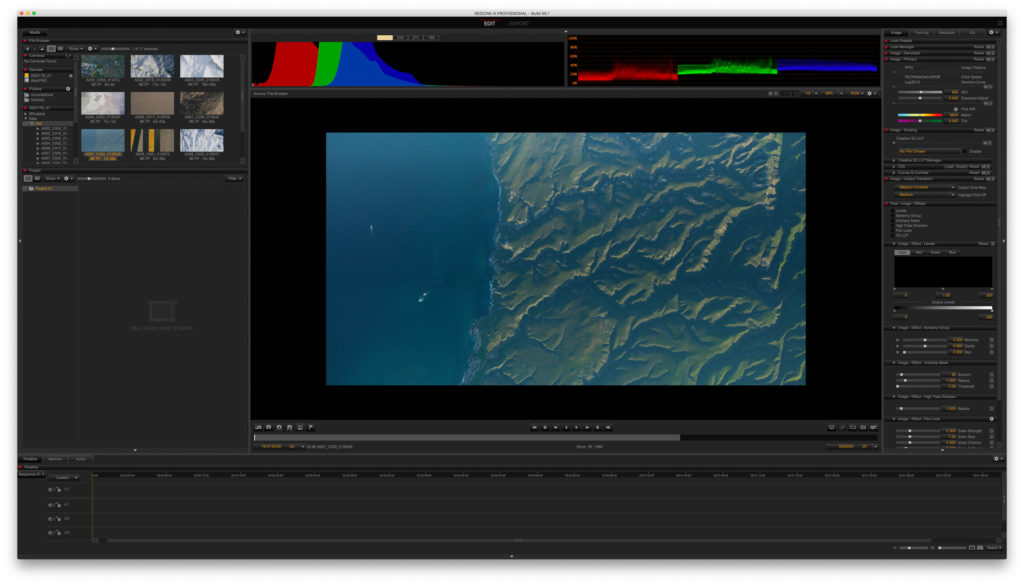 iMac Pro – 14 seconds of smooth playback before buffering  (if I let the computer process and render the file, it was able to render the file using the 128GB of memory and 10 cores in minutes and and playback in full screen 75% of the 60 fps clip.)

At 1/4 res I found the perfect balance:

iMac Pro – I was able to play the clip back at 1/4 res for a full 4 minutes before buffering – the first time I’ve been able to do that on a Mac at 8K in RED Cine-X – and I could truly judge the movement, sharpness and overall detail of the clip in full screen mode 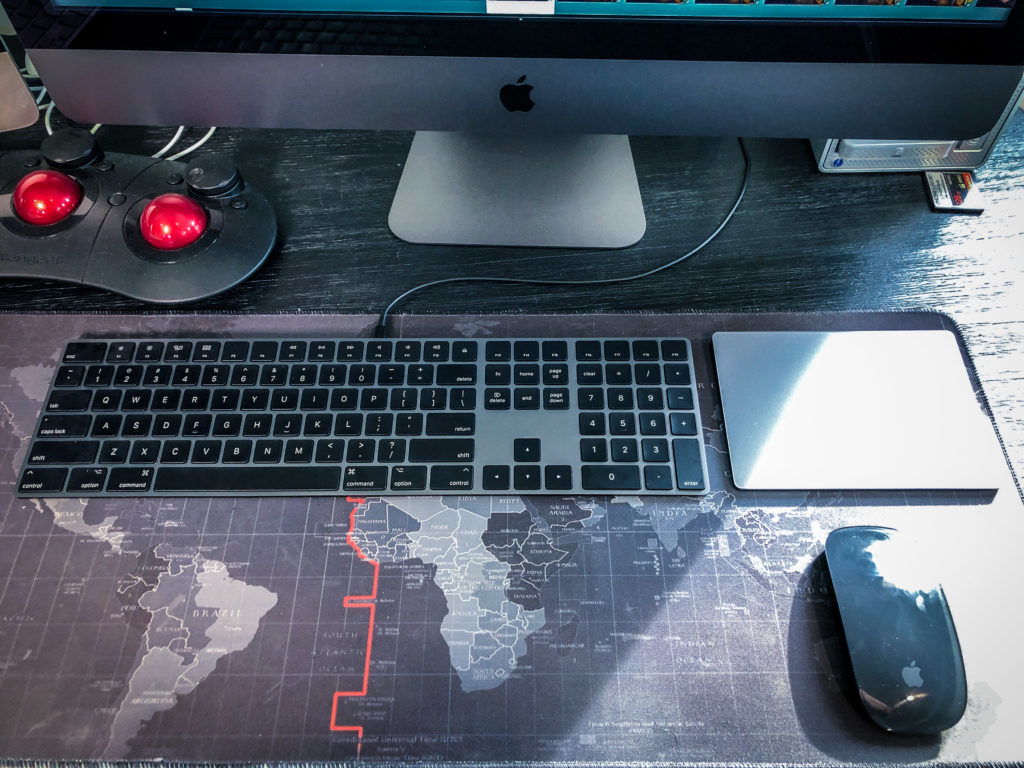 I had issues w/ High Sierra and couldn’t work reliably with RED footage.  However I was able to play the Mavic 4K footage reliably on all 3 machines full screen mode at 1/2 resolution.   Both the MacBook Pro 15” and the iMac started to stutter (with any movement in frame or when panning / tilting) when played at Full 4K resolution – noticeably so on the MacBook Pro.)   The iMac did well with playback at full resolution, however I couldn’t scrub the footage at all.   The iMac Pro was silky smooth at full resolution and scrubbing was nearly flawless.

Overall this is a wonderful machine that will satisfy all users out there – with the exception of the 0.1% of users who work in the 8K RAW RED world for example and want to transcode at 1:1 or faster with purpose-built machines.    If you’re shooting 4K or pretty much any still camera available today, this Mac is unlikely to let you down.   I know it’s tackled everything I’ve thrown at it and it’s the first machine that can keep up with me in an still edit of thousands of images or hundreds of minutes of video footage.